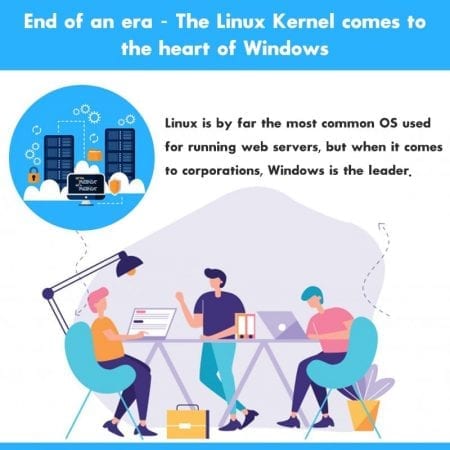 For many, many years, Windows vs Linux was one of the biggest ‘duels’ and helped developing two solid fanbases. And the comparisons were actually fascinating to watch, as each of them kept claiming that their favorite is the best, even though the differences were actually huge.

Windows, as we all know, was developed by a software giant, while Linux was made by a couple of programming enthusiasts from all over the world, initially in their spare time. However, we all know what happened and both names became iconic, while the rivalry was growing with each day.

But now it seems closer to an end.

Microsoft decided that it’s time to treat its operating system nemesis differently. After offering support for Linux on Azure, it also started releasing software for Google’s Android, as well as Linux, not to mention using its rival OS to power its cloud service.

Now, thanks to the new Windows Subsystem for Linux, one of the most recent features, Linux fans can run apps in Windows. Yes, you got that right!

To be more specific, WSL can translate commands created for the Linux Kernel – otherwise known as one of the main parts of the operating system, responsible with talking to hardware – into commands made for Windows’ very own kernel. And that’s not everything, as Microsoft wants to integrate Linux kernel directly into WSL, thus launching a new variant of the software, as a preview, initially, this June.

Of course, there’s one thing we need to make clear: there’s no way the company founder by Bill Gates is replacing the Windows kernel, as the idea is different. Specifically, the Linux kernel is supposed to work as a virtual machine, one of the common ways of using an operating system within another operating system. And this means that if you want to use the Linux kernel you need to install WSL.

Sure, this is one weird idea, but for programmers, it makes perfect sense, especially for those involved in web development.

Linux is by far one of the most widely-used OS for running web servers, but when it comes to corporations, Windows is the leader. Considering this, facilitating Linux code to run on Windows is excellent news for any dev who needs a Windows machine to write code supposed to run on a Linux server.

This decision doesn’t come as a surprise, as Microsoft talked a lot about openness at this year’s Build developer conference, as they are trying to position themselves as leaders from this point of view, especially when compared to other tech giants, like Google or Apple.

Looking forward to trying this solution within your company but just don’t have the time? The experienced team at IB Systems is here to help. With a background of over 20 years, a period during which they worked with both Windows and Linux, our developers are willing to take any challenge, as web dev on virtual machines has no secrets at all!