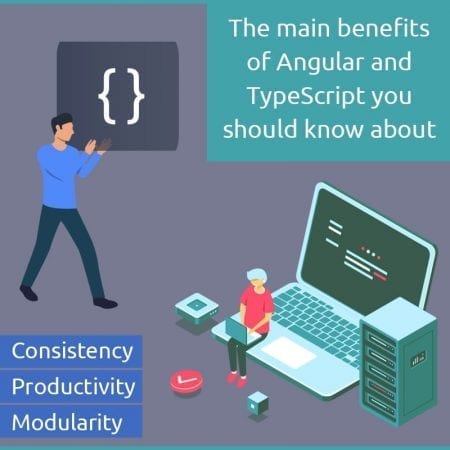 Before jumping into any kind of new technology, it’s highly recommended to spend a bit of time trying to find out about its pluses and minuses. And the same goes for a new framework, as you should start by finding out as much information as possible about aspects like app maintenance, change requests, its longevity or the pace of technology.

For example, let’s take Angular and TypeScript, otherwise two very popular options. A lot of development teams are interested in them, so with this idea in mind, we decided to make a list with a few of the most important benefits you should know about.

Probably one of the most important goals to concentrate on in a codebase is consistency. Let’s put it this way: if a team needs to support product apps, it’s obvious that code consistency is essential, as it can increase the maintenance.

Angular, for example, is based on components, as well as services, which can be pictured as the famous LEGO blocks, allow teams to go with the current instead of having the feeling that they’re always against it. Which leads to the next benefit…

You can’t talk about consistency and ignore productivity when the advantages of a framework are mentioned.

When you start learning to write a component, you can pretty much write another one by following the same code structure and its guidelines. And once you figure out the way of developing a service class, it’s simple to create another one.

If you’re one of those developers who like to rely on TypeScript for building Angular applications, then you’re lucky, as you automatically ‘inherit’ some great productivity benefits. Specifically, we’re referring to IntelliSense.

As you type, you can discover new types, as well as the features they offer. And if you use TypeScript interfaces, it gets even better: you get access to code help against the JSON data coming back from calls to a back-end service. How cool is that?

One of the things we really like about Angular is its “buckets” organizations. Basically, everything you put together, whether we’re talking about components, pipes, services and many others needs to be organized into one or multiple buckets. And depending on your coding background, this, combined with TypeScript, can be a real game-changer.

These buckets we’re talking about are actually named among Angular enthusiasts and provide a great way of organizing app functionality, then divide them into chunks you can reuse. And one of the main reasons they’re so popular is because they can be used to organize apps in a way similar to what namespaces and packages are doing in other frameworks, like .NET or Java.

Obviously, we can continue with the benefits of Angular and TypeScript for a few more hours but, for the moment, it’s better to focus on a few of them which are extremely important. Still, are these the best ones to focus on? Well, it remains a subjective question.

Our final goal is, after all, to help you understand why Angular and TypeScript are right now two of the top framework, loaded with benefits. And you might as well at least consider them for your development needs!

On the other side, if you are willing to try these frameworks but don’t have the right team, IB Systems can help you. The developers are available for outsourcing your projects and, with over 20 years of experience in development, you can expect only professional services.