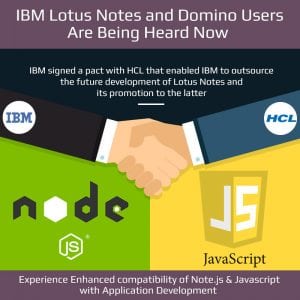 Long-term and steadfast users of Domino and Lotus Notes who have been crying hoarse for almost 5-6 years for attracting the attention of ‘Big Blue’ are finally having their prayers answered. IBM, the transnational technological corporation that developed the software programs, was almost on the verge of forgetting dedicated users of the applications. Nevertheless, things started looking up following the technological giant’s signing a deal with the Indian IT major-HCL Technologies. IBM signed a pact with HCL that enabled the IBM to outsource the future development of Lotus Notes and its promotion to the latter.

The outsourcing of the innovation and marketing of Domino/Lotus Notes has made a noticeable and palpable difference, as the clamoring users must have figured out. The mood in a webcast related to the future course of the longstanding computerized program, organized in the bygone week, was definitely upbeat. Participants in the webcast felt the vibes of a product that was on a comeback trail. Financial investments and unprecedented progress on the innovation front made the participants feel as if a phoenix was rising from the ashes.

Although there is still a lot of ground that has to be covered, but one thing is sure. Lotus Notes in its present avatar can only march onward. Kim Greene, a consultant who has been in this domain for long as one can remember, strongly felt that Domino, after a long time, was being showered with the attention it deserved. The community that had been unflinching adherents of this software application was finally being heard. He added that a change in management was long overdue in the Domino setting and it was ultimately taking roots.

Kim Green has been with Domino through thick and thin and witnessed the ups and downs of IBM i shops which heavily invested in the brand that was originally known as Lotus Notes. He went on to iterate that the deal with HCL has proven to be remarkably effective as of now, and will surely turn out to be an incredibly crucial in the near future. He was of the opinion that had IBM dragged its foot on the pact, the product surely would have become extinct. HCL was handed over the responsibility to oversee the development of the entire product package of the technological behemoth 4 months back.

HCL was successful in stepping up the momentum, thanks to the retention of the hub of product developers. A release of Domino v10 is scheduled towards the latter part of the year, most probably in the third quarter and so things have to be paced up pretty fast. Last week’s webcast gave a sneak peek of the achievements of the development team and how the accomplishments will appear on the roadmap in the long run.

Fast-paced development is the order of the day and that entails exposing codes and experimenting with betas and prebetas complete with accompanying feedbacks, adjustments, and tweaks. Viewing from a technical standpoint, the executives has emphasized development on framework and state-of-the-art tools, doing away with conventional limitations, and stepping up core performance. A sequence of Domino Jams were held towards the end of 2017 and beginning of 2018, where approximately 22,000 users came together to voice their opinions regarding upgrading the product. It is the incorporation of those feedbacks that facilitated the emergence of a crystal clear roadmap and product vision.

Users may also experience enhanced compatibility of Node.js and JavaScript with application development. This will evidently be an initial move towards giving weightage to smartphone applications and open standards. Priority will be accorded to the development of apps that will compliable for using on mobile gadgets. V10 Domino is being looked upon as the first installment as far as the future development course of Lotus Notes is concerned.

iBSi is an IT and online marketing firm based in Clearwater, Florida that can offer full-scale support on Lotus Notes and Domino applications to those who wish to take advantage of the same.