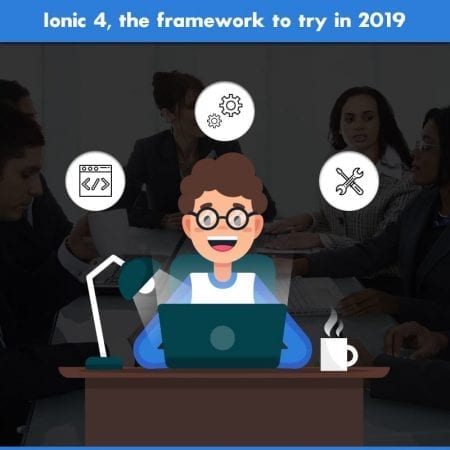 During the first month of the year, the latest version of Ionic Framework, 4.0 – or “Ionic for Everyone,” as the developers like to call it – was introduced, after two years of intense research.

The team behind the project had a difficult mission, as they attempted to transform Ionic into a powerful system for User Interface Design, but also an app framework, available for any developer, while leaving behind the “mobile for Angular” period.

Ionic Framework began its adventure in 2013, as the developers were looking forward to building components powered by JavaScript, usable for building advanced mobile apps, combined with web-based technologies, and eventually share them as custom HTML tags, so developers could integrate them in their apps.

As technologies advanced, the Ionic Framework team was aware of the fact that it was mandatory to port their project to Angular, thus ending up releasing new versions. Ionic 3 turned out to be one of the most successful versions!

In 2017, they started thinking about the idea of transforming Ionic completely and transform it into a ‘collection’ of Web Components, as this was supposed to be the way user interface libraries are be distributed over the next years. And this led to the development of the current version of Ionic Framework…

Ionic 4 is nowadays available, distributed – just like the devs wanted – as a set of Web Components, relying on the Shadow DOM API, but also Custom Elements, both of them being available on any modern desktop or mobile browser.

Keeping it short, any web developer can make use of Ionic’s components, whether’s they are working on mobile, desktop, or Progressive Web Apps. And this is incredibly simple, as everything they need to do is to make good use of Ionic’s custom HTML tags in the apps they’re working at.

But this is not everything! Considering that Ionic Framework now focuses on regular web APIs, instead of third-party ones, its component APIs will surely remain stable for a lot of years. Which is an incredibly big plus!

Ionic 4 can be considered the most accessible and, at the same time, a future-proof version of the framework, but the developers claim that it’s also incredibly fast and complete, from all points of view.

Specifically, each of the 100 components contained by Ionic has been carefully evaluated and check for performance issues, platform look and feel, and the ability to customize themes. The components also received a complete iOS and Material Design makeover, so they can match the latest standards imposed by the two main mobile operating systems.

For Ionic to be able to reach all standards set by Google, the latest Ionic Framework needed completely new approaches in terms of asynchronous component delivery and loading. But the team immediately came with a solution, putting together a web component pipeline, based on Stencil and able to generate all the framework’s components.

Probably one of the main changes brought by Ionic 4 is the switch to native CSS Custom Properties, for every component. This makes exposing a “public theming API” possible, therefore providing the structure developers need in order to brand and customize the framework’s components.

And last but not least, the documentation was completely revamped, this being one of the aspects the developers are incredibly proud of.

With more than 20 years of experience in working with the main frameworks, the IB Systems team is qualified to help you with your project, based on the fourth version of Ionic Framework. Just get in touch and see how you can use their expertise in your advantage!