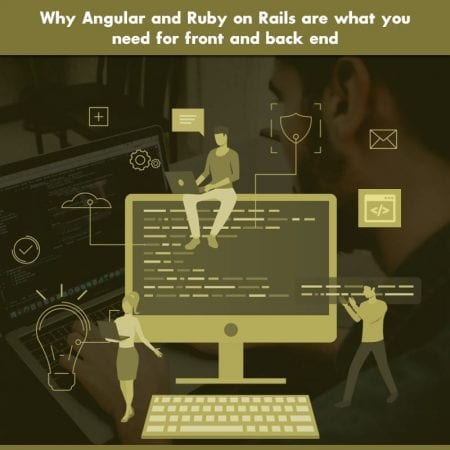 There are plenty of solutions a developer can choose from when it comes to front end, as well as back end solutions, so it can be a pretty difficult task to decide upon one of them when you’re a beginner, for example. Still, you’re in the best place if you’re looking for some answers.

After years of working with ‘tools’ like Angular, React, Ruby on Rails or Python Django, as well as many others, we were able to make our choices for both front and back end.

The front end tool of the trade – Angular

First thing first, we should mention that Angular is not a library, but a framework, meaning that it does things in a very opinionated way. What we really like is that the team behind it is incredibly competent and provides valuable support for the developer community, which is a very big plus, especially for newcomers.

In contrast, some would say that Angular is not that popular on Github – React, for example, has 91K stars, way more than 34K – but this could be just a matter of personal preferences.

Overall, considering that Angular is excellent for designing Material Design apps, something which Google is a big fan of, but also the fact that a lot of Google sites are using it, makes us recommend it for anybody who wants to start on a new road.

Ruby on Rails, the difficult choice

This one took us a few years, but in the end, we have to go with Ruby on Rails, despite a Python Django having an incredibly big fan base. Ruby remains a very powerful and ubiquitous programming language, with several libraries, while the community support has always been helpful for us. And there were some tricky situations from which we couldn’t escape without the help of some proper Ruby on Rails experts.

Of course, some would say that sometimes it doesn’t matter which framework you pick, as well as the end result looks and works properly. But for us, Ruby remains the main choice.

One aspect that we don’t want to forget about is that…well, nothing is perfect, even when it comes to the tools we’re using for developing apps. Angular and Ruby on Rails are both great, but there’s still room for a lot of improvement.

Until then, they can be excellent choices for beginners, but also experts, who want to develop top web apps. And, as a side note, there’s going to be a constant need for these, as people appear to be reluctant to download an app from Google Play or App Store, something which can seriously affect a startup, for example. Also, browsers are becoming incredibly powerful, so web apps will be able to offer the same speed and features as native apps do.

And finally, because the engagement counts a lot, features like notifications, offline support and home screen placement will also be available on web apps. Hey, we’re not the only ones saying this!

Whether you’re looking for front end or back end solutions, the team at IB Systems is ready to help. Angular and Ruby on Rails have no secrets, but they’re not limited to them, as the team members have over 20 years of experience in software development. So no matter your requirements, get in touch and they will find the solution you need.