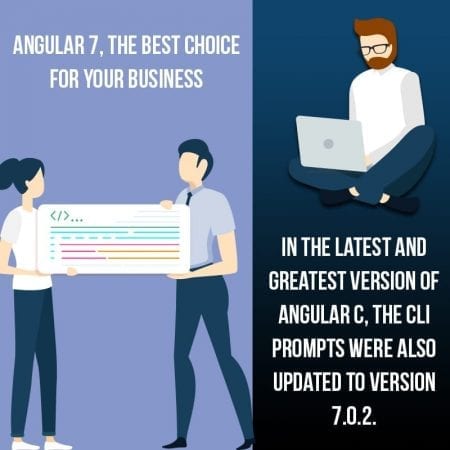 This spring, one of the most popular frameworks for web apps development got a very important update. And we’re not talking just about your regular update, fixing a couple of bugs. No, on the contrary, a set of new features were implemented, in an attempt to make developers’ jobs easier.

Yes, today we’re going to talk about Angular 7 and some of the reasons why it can be an incredibly useful addition to your business.

Keeping it short, it’s one of the best choices for front end development, continuing to focus on the Ivy project, which is basically rewriting runtime code, so it can become faster and more concise.

Still, enough with the details! Let’s see which are a few of the reasons why you should rely on Angular 7 for your business’ front end needs!

In the latest and greatest version of Angular C, the CLI prompts were also updated to version 7.0.2. And, obviously, this includes a couple of really cool features, like, for example, combining budget when creating new projects in Angular 7.

Of course, there are way more than this, but we’ll let you discover them all by yourself.

It’s not a secret that almost all developers are doing their best to add reflect-metadata while in the production phase, even though this is actually required just during the development phase.

Also, another important aspect that we need to mention is that with this update, polyfills.ts files will be removed automatically, adding everything as a build step, during the app development process, in JIT mode.

Oh, and one more thing: Angular 7 is focused on performance A LOT, so in order to achieve this, the new apps you’re developing can trigger a warning if the initial bundle gets more than 2 MB. Also, an error will be given at 5 MB, editable in the angular.json directory.

Moving on with our list of advantages Angular 7 offers, we should mention that the framework came with a couple of great improvements in material design as well. We’re talking about Virtual Scrolling, as well as Refresh Unloading and Loading parts of DOM when building big lists of data.

Simply put, using it, you can make apps by using drag and drop or by simply importing scrolling or drag and drop modules. Considering this, we must agree with one thing: Companies using Angularjs App Development can benefit from this very much.

Speaking about virtual scrolling, let’s take a few moments and make this concept clear: it allows both loading and unloading items from DOM, based on visibility. Basically, it adjusts the height of the container so it has the same size as the length of the overall elements which will be rendered.

And this, ladies and gents, makes it faster for users who need to go to a process they all probably hate: scrolling large lists.

And finally, Angular 7 made some impressive progress when it comes to its drag and drop functions. Developers can use these to create an interface way faster, saving precious time. They can also sort within lists, but also transport elements between multiple lists.

So, do you need any extra arguments? There’s no doubt that we’re looking at an incredible choice for app development and it’s called Angular 7. However, if you don’t have the time or resources to implement it within your company, you can ask for professional help!

With more than 20 years of experience, IB Systems has been working with Angular ever since version 2 was released. Drop them a few lines and see how they can put their front end skills at work for you!