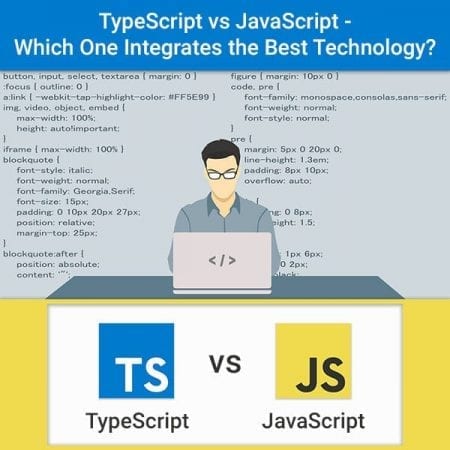 Most programmers will agree that JavaScript is one of the veterans of the game, but also that TypeScript can be considered one of the most promising newcomers, adding a few goodies that JS has been lacking for some years, helping people write better code, especially when it comes to large apps.

Nevertheless, there’s one big question a lot of coding enthusiasts are trying to answer: Which one of the two, JavaScript and TypeScript, integrates the best technology right now?

A solution for larger applications

In theory, JavaScript is not exactly the best options for developing larger apps, while when it comes to smaller ones, just one programmer can easily go through the entire chunk of code, in order to find mistakes. Still, it turns out that it’s used for larger apps more and more options, this being considered a pretty good thing!

In contrast, TypeScript seems to be the one gaining more popularity due to its offerings. In theory, it can be considered a programming language providing just the right amount of strictness, while the compiler can be used to develop to modern JavaScript environments. Therefore, a developer shouldn’t have any problems at all with writing, complex, large apps, using it.

The king of popularity

Sure, TypeScript comes with a pretty big amount of technical merits and nobody can deny the fact that it added a lot of useful features to JavaScript. So there’s no wonder that it’s incredibly popular right now. But this doesn’t mean that it’s the number one choice…

A simple research using Google Trends reveals that the interest in JavaScript is actually dominating – still dominating, that is – while TypeScript keeps gaining popularity.

Therefore, anybody who hasn’t tried it yet should totally keep an eye on the latter, as the interest is seriously taking off.

What do people actually say?

Evaluating technology can be done in numerous ways, like looking for blog posts about it or, even better, going directly to the source: checking out what developers are saying. And fortunately for us, there are a lot of opinions on both JavaScript and TypeScript.

Most of them state that TypeScript is nowadays becoming the new and improved JavaScript, being exactly what developers need, as they are after more type safety, but also insights into potential issues during the app development process.

An interesting point of view was made by Eric Elliot, who talks about a study which took into consideration some of the most important open source projects, looking at all the bugs found in a project and trying to determine if TypeScript is able to find them at compile time. And guess what? In a lot of cases, the bugs were squashed!

Since it’s not a secret that the earlier a bug is detected, the cheaper is to solve the problem. Therefore, we can say that TypeScript is incredibly useful for describing both types and object contents.

Considering this last argument, but also everything the community of developers is saying about it, TypeScript appears to be…the future. So there’s no wonder that a lot of people are using it more and more often. Still, this doesn’t mean that JavaScript was left behind, as it still has a big community of evangelists backing it.

Whether you’re part of the OG fan club and prefer JavaScript or a supporter of the rising star TypeScript, the team at IB Systems can help you with your projects. With more than 20 years of experience, the two programming languages have no secrets for them, so there’s no doubt that they should be the first choice!