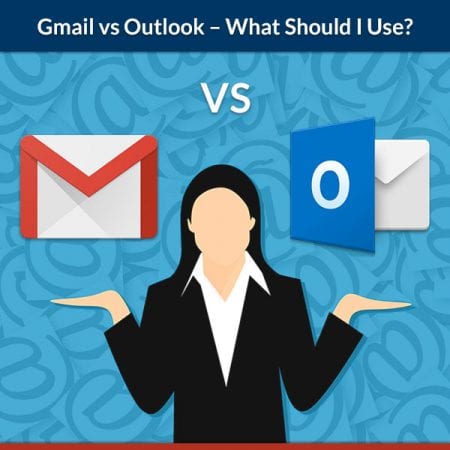 Some decisions are hard to make. Android or iOS? Xbox or PlayStation? Outlook or Gmail? While the first two can lead to endless discussions, the latter is what we’re going to talk about today, trying to find out which one of them is the best email client of the moment.

Google announced Gmail back in 2004 when their solution was offering just 1GB of storage space, not to mention that it was considered an April Fool’s Day joke, since it was released on April 1. As for Outlook, it’s basically a reinvented Hotmail, which is around ever since 1996. Eventually, Microsoft bought Hotmail the following year and rebranded it as MSN Hotmail, then Windows Live Hotmail. Finally, in 2013, they reached the final name: Outlook.

Ok, so we know their history, but in terms of features and offerings, which one is better?

From this point of view, both clients come with a clean interface, offering a couple of default colour themes. While Outlook borrows a few design characteristics from Windows’ UI style – also known as Metro – Gmail recently went through a redesign which improved the user experience, as it puts the accent on simplicity, allowing the users the concentrate more on emails.

As mentioned above, Gmail is now offering a lot more than in 2004. To be more specific, users have 15GB of free storage, but this also includes Google Drive. However, you can always buy additional storage, if you’re the type of users that get tons of emails per day. The size of the attachments is limited, to a maximum of 25MB.

As for Outlook, it offers the same amount of storage for each account, but until recently, it was unclear how much storage you get, depending on what other Microsoft products you are using. However, if you have an Office 365 subscription, you eventually get 1TB of storage.

Gmail managed to differentiate itself from the competition, as it offered labels instead of folders. This allowed users to tag their messages using different labels, instead of moving emails from one place to another. However, emails are now organized into Primary, Social, Promotions and Updates tabs, saving you a lot of time.

Moving on to Outlook, it has a classic folder structure and uses categories instead of labels. You can put a message in multiple categories, while the client itself tags specific messages with categories accordingly. This feature is known as Quick View.

As you would expect, Gmail can be easily integrated with Google Docs, so you can – for example – open up attachments in Google Apps, then save them to Drive. And this is not everything since there are a lot more third-party apps which can be integrated within Gmail, besides traditional ones, part of the Google ecosystem.

In Outlook’s case, there’s still a lot of work to do from this point of view. Still, the email client integrates perfectly with Office 365 apps, as well as OneDrive, not to mention the ability to easily access Word, Excel, PowerPoint and OneNote Online.

Despite the differences between the two clients, as well as their plus and minuses, we can’t exactly decide upon the best. Sure, a lot of people claim that Gmail is by far the best option, due to its seamless integration with Google services, but in the end, it’s just a matter of personal preferences.

If you have trouble deciding which of these two is the best for your business, IB Systems can provide the support needed. Backed by more than 20 years of experiences, a team of experts is always ready to give you the advice you need in your decision-making process.