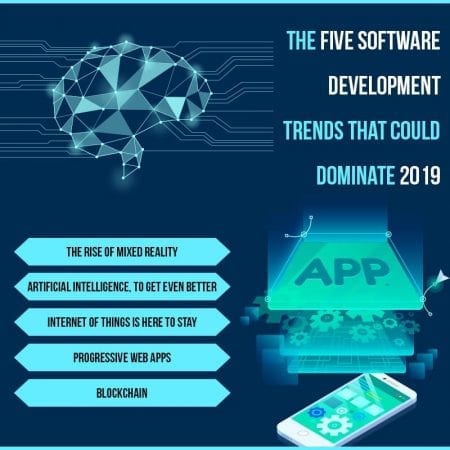 Like pretty much any other industry, software development is influenced by trends. After all, nothing and nobody can resist change, so it often welcomes innovations that eventually bring changes in the way devs work.

2018 was all about Artificial Intelligence and blockchain, the latter being expected to bring a total investment of 2,312 million, globally, by 2021. But still, let’s stick to the present and try answering one important question: what software development trends will dominate 2019?

Obviously, we can’t predict the future, but we can make some guesses, so let’s see what we could expect from this year…

The rise of mixed reality

Simply put, it’s the combination of VR and AR, two technologies which won great amounts of growth over the past years, mostly thanks to smartphone apps. And the popularity of these devices is pretty much the main reasons why companies will keep investing in creating mixed reality experiences.

As an example, one of the most complex mixed reality projects released so far, Microsoft’s HoloLens, is already used by the United States Army, for military training purposes. Because it’s way more than just a way of entertainment

Artificial Intelligence, to get even better

It looks like AI is here to stay, as machines based on it are starting to conduct even some of the tasks that were until now restricted to humans!

Overall, it can be said that IT has the power to improve business tasks and make them way simpler. And this, if you ask us, is a great step forward.

Internet of Things is here to stay

Every second, almost 130 devices will be connected to the Internet, while until 2020, more than 90% of vehicles will be IoT-enabled, according to a study from PWC. Even more, another research claims that in 2018, there were around 23 billion devices connected to the world wide web.

This year, we’re expecting to see software development for IoT devices reach a new level and get the above-mentioned estimations closer to reality.

Basically a hybrid between mobile and web apps, these are totally different from regular mobile apps, with their scripts – or service workers – being what makes them work.

Easy to develop and maintain, PWAs will keep gathering interest from top software development companies, as their main feature is the ability to load them fast even with a weak internet connection.

And finally, we have the technology which can influence way more than just software development!

Blockchain is clearly one of the most popular topics of the moment, finding ways to penetrate domains like media, healthcare, publishing, banking or finance. App developers with solid blockchain knowledge are required more than ever and we expect this demand to keep growing in 2019.

Ever since 1995, the team at IB Systems has always been up to date with all the breakthrough technologies when it comes to software development. For all your dev needs, whether it’s long term or off-site short projects, one call can bring the solution!