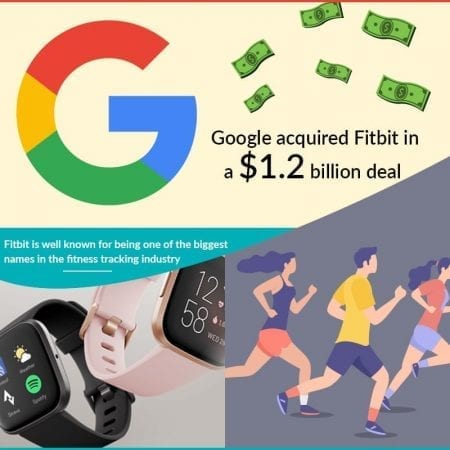 While a lot of its competitors in the tech game released several wearables over the years, Google somehow remained silent. Still, this is about to change, as the search engine giant just bought Fitbit, in a deal estimated at around $2.1 billion.

Obviously, this will eventually put the company in direct competition with two of its main rivals, Apple and Samsung, as they are already present in the highly competitive wearable market. But on the other side, it will also raise some question marks regarding users’ privacy…

But Google is apparently aware of what scandal this acquisition can create!

Fitbit is well known for being one of the biggest names in the fitness tracking industry, raising a huge fanbase over the past years, counting over 28 million users across the world. Also, let’s not forget that their products have become pop-culture accessories!

As for Google – otherwise owned by parent-company Alphabet now – they are already making software for wearables, under the name of Wear OS. Still, as mentioned above, they still don’t have a wearable built under their own brand, not to mention that Wear OS devices are far from being as popular as the Apple Watch, for example.

Analysts believe that through this move Google is looking forward to telling its competitors that they don’t want to be left out. After all, if Apple managed to release such a successful project, why wouldn’t they do the same thing?

This Friday, when the deal was announced, they also promise that they will never sell ads based on the health data connected by Fitbit devices. Of course, we’re looking forward to seeing it they will eventually keep their promise.

Privacy experts are also skeptical regarding this. Specifically, we could see people enrolled in wellness programs lose control over their data, for example. This wasn’t the case until now, but after Google joined the party, nothing is impossible.

Let’s take one example, in order to clearly understand how Google could benefit from this.

A lot of Fitbit models have built-in GPS, able to track users’ locations. Google would be able to see that a jogger stopped in front of a coffee shop and as soon as he gets home he would see ads for that specific coffee shop.

A lot of people aren’t supporting the acquisition, especially considering that the Alphabet-owned company is under DOJ antitrust investigation. But still, maybe they will keep their promise, after all, just to prove to people that Google is not just about throwing ads all over the place.

Looking forward to solving your website’s privacy problems, in order to avoid any problems caused by this? The team at IB Systems is at your service.

With over 20 years of experience and a team always up to date with what’s new in terms of data security, they are exactly what your business needs to offer users a safe and secure online experience.