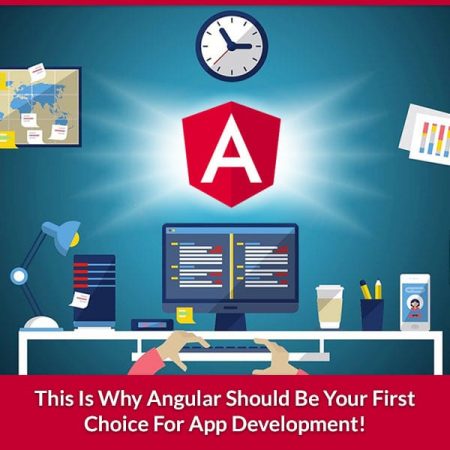 “Mobile first” is clearly a trend that’s going to dominate web development for a few years from now one and a lot of companies are considering it when creating new apps. And even though creating a mobile-friendly app can be relatively easy, as long as you have the right team, picking the right platform for doing it can be the real challenge!

Introduced ten years ago, in 2009, Angular was considered the next big thing for web-based applications development. Based on a JavaScript framework, its ‘mission’ is to facilitate and simplify front-end development.

As for us, we believe that it’s among the best choice any dev can make!

Loaded with several plugins and frameworks, both designers and developers get along with Angular. And here are a few of the main reasons why you should choose it as well, over other available tools…

Given the fact that AngularJS relies on a simplified MVC structure for development, the loading times are significantly lower. And, as a matter of fact, this is one of the main reasons why it’s the top choice!

No more unnecessary code, no more slow apps that need a lot of time to load. Angular is all about speed and smoothness, which should be some of your main targets if you want to deliver a seamless experience through your apps.

As mentioned above, with Angular you’ll have less code to write. Allow us to explain why and how is this possible.

The platform comes with a declarative framework that understands better how the application you’re developing operates, before the execution. Thus, it allows its optimization!

In this case, the idea is simple: if you’re using Angular 7.1 or newer, simplifying the code is possible. And this quite an important advantage, if you ask us.

A new way of compiling

Angular can be a great solution for creating applications, this is for sure. But you should also know that this wouldn’t be possible without the integration of TypeScris language, a Java superscript.

Thanks to this, the security of your apps is increased, while helping you to catch and eliminate errors in the early stages of development, while the code is still being written.

And finally, thanks to TypeScript, you can choose between two compilation modes: EcmaScript 3 and EcmaScript 5. Technically speaking, it’s the rigor and flexibility of this language which makes Angular so great for application development!

For us, these are just three of the main reasons why Angular should be your first choice when looking for the best platform for app development.

Yes, it has way more pluses than this, like its component-based architecture, the extensible and modular platform, or the complete framework with very elegant architecture. Plus, let’s not forget about the extensive documentation it includes, containing basically everything you need to know about the platform, and the great community created around it, able to help you whenever you’re stuck with something.

To wrap it up, we’ll go as far as calling Angular the ultima choice for creating complex and visually appealing apps, with, of course, a huge focus on mobile. Because the future is all about this!

If you believe that it can be the best choice for your web development requirements but don’t have what it takes to begin using it, the team at IB Systems is ready to help!

More than 20 years of experience in software development and a close ‘relationship’ with Angular, ever since version 2, as well as unmatched services, are just a few of the arguments in favor of a collaboration!