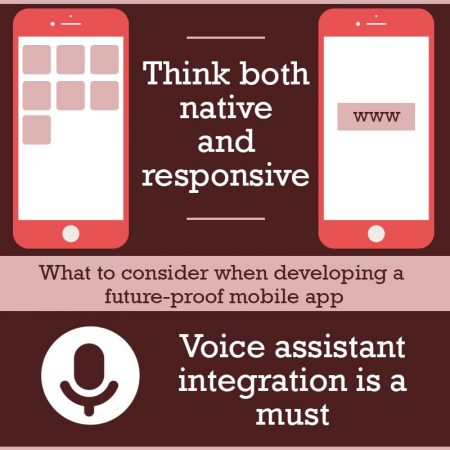 Analysts claim that by 2025 the mobile industry will significantly grow, reaching a total number of 5.9 billion users. As a side note, this translates to roughly 71% of Earth’s expected population. Let that sink in for a moment.

And this could mean just one thing: your business needs an app. Better now than later!

But before starting the entire mobile app development process, there are a few things you should take into consideration. After all, if you make an app, you need to make sure it’s a great one.

Focus on the user

The average user has around 35 apps on his phone, but just 5 of them are used most of the time. Therefore, it’s essential that, when building an app, the focus should remain on consumer requirements, but also take into account the already existing decisions, then refine them as much as possible.

Remember: nowadays, mobile apps users are after personalization and adaptation. And that’s exactly what your app should do. Otherwise, it will be one of those 30 apps that aren’t used very often.

Think both native and responsive

Most mobile app development companies will ask you if you want your app to be created for mobile (native, that is) or go for a design that adapts to any device (display).

Of course, a general recommendation would be to go for both. However, not many companies do this, so before making this decision, think about your resources and your visitors.

Is your budget lower and your visitors occasional? Responsive web design should do the trick. Are you dealing with returning users constantly? Native is the way.

Voice assistant integration is a must

5G technology is not far from being integrated into gadgets, as more manufacturers are considering its advantages, like the ability to consume video content quickly, for example. But this will also facilitate the widespread of voice assistants!

We’re already at a point where Siri, Alexa or Google Assistant don’t need to prove anything anymore, as they have already shown their potential. But this won’t stop developers from taking advantage of their ‘powers’ over the next years.

The first thing that comes into our minds is both marketers and publishers taking advantage of this still revolutionary technology to better communicate with app users. But this is just an idea, as the possibility is pretty much endless!

To wrap it up, mobile app development will – probably – revolve around three main aspects over the next years: speed and efficiency, precision and profitability, as well as reliable access.

We’re talking about a constantly evolving market, but also users who want to access content as quickly as possible and stay up to date with everything new. As a business owner, you should keep all these in mind when thinking about building an app. The focus should also be on the customer.

Sure, it’s important to create an app for the businesses you own, but it’s not exactly the easiest job. Plus, it needs to be tailored according to your organization’s needs and, obviously, your user persona’s needs.

IB Systems can help you with your app development needs!

With over 20 years of experience in software development, our skilled team is up to date with the latest trends in app building but also in the know with what the future holds for this market. Schedule a call and see why we’re the right fit for your business!